The City of Leeds has a storied history of innovation. In 1888, the first ever film was recorded of a bustling 19th century bridge connecting parts of Leeds separated by the River Aire. Four decades later, a novel system of road management, the red, amber and green traffic light were trialled for the first time in Leeds in 1928. Both of these inventions were likely to have been considered as outlandish and non-essential endeavours, however, both inventions have gone on to become ubiquitous necessities in our modern world. As we move into the 2020s Leeds will once again prove to be a testing ground for a significant new development.

Leeds has been identified as a trial city for an innovative and vitally important experiment in the battle against climate change. The trial involves making Leeds a gas-free city. Instead of having natural gas piped into homes and businesses, powering our appliances, Leeds would utilise Hydrogen. The Northern Gas Networks have established the “Leeds City Gate” team, who have a brief to design, scale and implement the proposed transition to turn the Gas-grid in Leeds into a Hydrogen grid.

This project is a huge undertaking, both in terms of infrastructure and public engagement. How many miles of pipework need upgrading? How many thousands of gas cookers and boilers need converting to run on hydrogen? Given the scale of the task, you may ask, why bother?

The answer is climate change. The UK is committed to reducing its CO2e emissions by 80% by the year 2050 from its baseline levels. The use of natural gas contributes significantly to the UK’s emission of greenhouse gas. Moving from a gas-grid to a hydrogen-grid would substantially reduce these emissions.

So how would the hydrogen grid work? The first stage involved a process known as Steam Methane Reforming (SMR). A (very) simplified explanation of SMR explains that Methane (CH4) is placed under high temperature and pressure to create hydrogen (H­2) and carbon dioxide (CO2­). Thus, the hydrogen has been separated from the carbon. Therefore, when the hydrogen is piped into homes and combusted, there is no carbon released. The carbon generated during SMR can be captured at source, thereby reducing greenhouse gas emissions.

The Leeds City Gate project is well underway and looks as if it will go ahead. Whilst there is no date yet for when it will be implemented, the Leeds City Council appear to be supportive of this scheme. Given that Leeds City Council recently declared a Climate Emergency this is not surprising, as the council are looking for a variety of ways to reduce CO2e emissions urgently.

Can the city lead the way on decarbonising the grid? Can Leeds become a gas-free city and lead the fight against climate change? Time will tell. 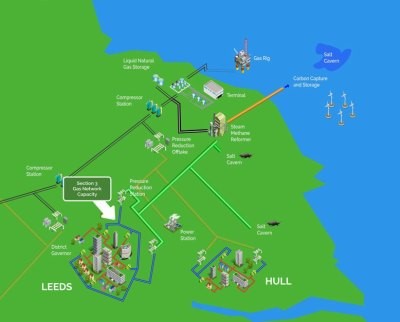 Join WRM at 12:30 on July 16th for an overview of the Medium Combustion Plant Directive

The MCPD will apply to many projects with on-site generation across a wind range of sectors dependent on plant size.

A boost for the continued growth of the anaerobic digestion and green gas sector?

We deliver great results and value for our customers. Get in touch with us today to find out how we can support you with your sustainable projects and aspirations.