A radical initiative to improve recycling rates prompted by Kirklees Council in Huddersfield, West Yorkshire, has seized over 1,300 recycling bins in just 5 weeks. With one of the worst recycling rates in the UK, the council is attempting to increase recycling rates from 27%, which is well below the national average of 45%.

Around 90,000 properties across the region formed part of the scheme that operated a ‘two strikes and you’re out’ system. A team of 12 Advisors would check the contents of recycling bins and place stickers on bins containing incorrect items. After two warnings the bin would be confiscated for up to six months.

The Council argued that residents were using their recyclable bins as an additional waste bin. However, since the start of the project, Kirklees Council have reported the scheme to be a success with 98% of residents recycling properly after being educated on what can go in the recycling bin and what must be placed in the grey residual bin.

Despite the confiscation of over 1000 bins, the Council is now recycling an additional 35 tonnes of waste every week which would have otherwise been sent to landfill or burning. Before the recent campaign, 33% of waste being received was rejected by Suez, who turn the material into MRF and it has now been reduced to only 6%. As contamination is a significant barrier to recycling it’s an important achievement, as the load is rejected if any type of contamination is present within the recycling bin.

The scheme has cost Kirklees Council £80,000, but the authority said it could eventually save £440,000 by boosting recycling rates.

WRM is pleased to learn about the ingenuity that local councils and businesses are implementing in support of recycling and the wider climate change goals of the UK. We must support initiatives that make recycling easier and where possible, encourage the reuse of materials before they are discarded. 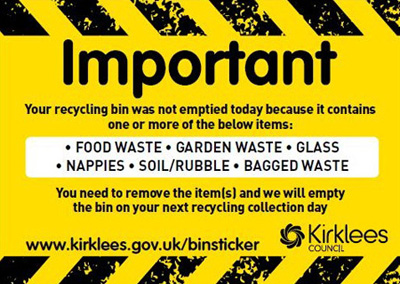 A short explanation on bioaerosols, identifying where you'll find them, and if they are a concern to workers' health.

Highlighting the importance and the benefits of managing the Health and Safety of employees.

An Environmental Risk Assessment needs to be part of an operator's Permit Application if you are regulated by the EA.

We deliver great results and value for our customers. Get in touch with us today to find out how we can support you with your sustainable projects and aspirations.